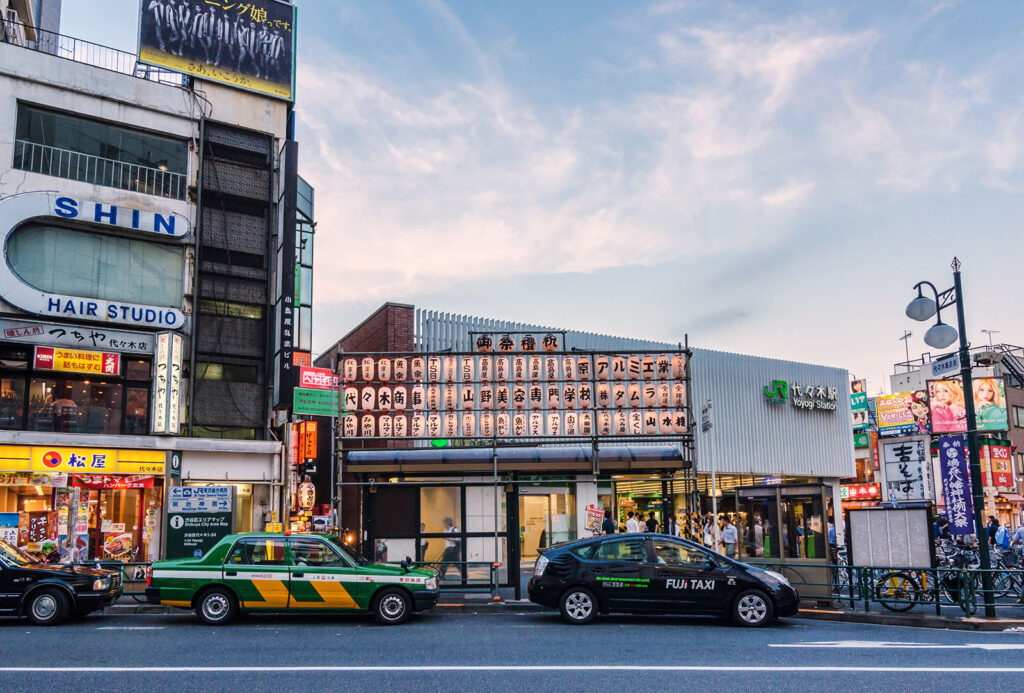 Located adjacent to Yoyogi Station is Yoyogi Park is one of the largest parks in Tokyo .

Yoyogi Station代々木駅・よよぎこうえん (代々木: 代 – generations and 々 – generations of 木 – trees) was first opened in 1906 by a private train company as a stop on the Chuo-Line中央線・ちゅうおうせん, but it’s tenure as a private railroad station lasted just one week before its parent company were taken over by the 日本国有鉄道にほんこくゆうてつどう・Japanese National Railways.

The name, Yoyogi代々木・よよぎ means (代) generations and (々) generations of (木) trees, probably for the many trees on the grounds of the eponymous 代々木公園よよぎこうえん・Yoyogi Park and 明治神宮めいじじんぐう・Meiji Jingu Shrine just to the south of the Station. The half million square meter Yoyogi park has in excess of 15,000 trees on its expansive grounds and feels more like a forest than a park.

In spring春・はる thousands of people come to enjoy the 桜さくら・sakura blossoms and in the fall they come back to enjoy the fiercely golden leaves of the 銀杏ぎんなん・ginko trees. Yoyogi Park offers free 自転車じてんしゃ・bicycle rentals for children子供・こども, trails for 散歩さんぽ・walking, picnic tables, and fountains噴水・ふんすい where one can just sit and enjoy the park.

The 森林しんりん・forest of Yoyogi Park continues onto the grounds of Meiji Jingu Shrine, is the largest and grandest shrine神社・じんじゃ in 東京とうきょう・Tokyo. Several paths wind their way through the mixed cedar and deciduous trees and massive torii鳥居・とりい gates to the 神社じんじゃ・shrine at the heart of the grounds. With this much greenery and the sights, sounds and smells of a forest permeating your senses, this is the perfect place to leave the city behind.

On the south end of 代々木公園よよぎこうえん・Yoyogi Park, closer to Harajuku Station is the Yoyogi National Stadium国立代々木競技場・こくりつよよぎきょうぎじょう, site of the 1964 Tokyo Summer Olympics. During the Olympics swimming and diving events were held at this location. Today it plays host to ice hockeyアイスホッケー and basketballバスケットボール games. The stadium’s futuristic suspension roof and tent-like design solidified its place as an important Tokyo landmark.

Lastly, NHK studio park is located next to Yoyogi Stadium. This is Japan’s Hollywood, and you can take a tour and see how TV shows are produced and broadcast. There’s even a hands on museum where you can try your hand at announcing, acting, or capturing all the action on camera. Ready for your close up?