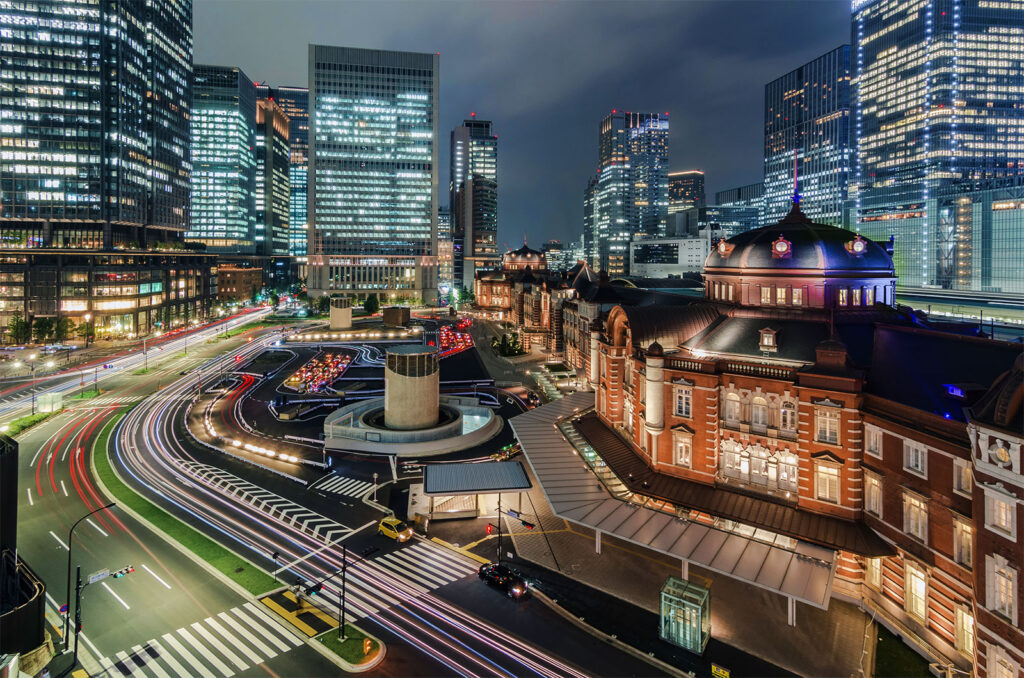 With over 4000 trains per day passing through it, Tokyo Station is the beating heart of Japan’s transportation network.

Tokyo Station東京駅・とうきょうえき (東京: 東 – East 京 – Capital) is the beating heart of Japan’s transportation network. With over 4,000 trains passing through the station per day (not to mention all the buses and taxis available as well), you can get anywhere in the city from this station. Every 新幹線しんかんせん・Shinkansen but one starts and terminates here, as do 5 regular 電車でんしゃ・train lines and one subwayメトロ・めとろ line.

The original Tokyo Station building, on the 丸の内まるのうち・Marunouchi side, was recently restored to its original 1914 appearance. It’s red brick construction and graceful dome roofs are something to admire. The station also houses a large number of restaurants and stores making it a great place to do some shopping or grab a bite to eat.

The Marunouchi business district, is one of the wealthiest in the world and is home to the headquarters to thousands of companies and numerous government offices including 9 大使館たいしかん・embassies. The Japanese Meteorological Agency気像庁・きそうちょう, the National Diet Building国会議事堂・こっかいぎじどう and the Supreme Court of Japan最高裁判所・さいこうさいばんしょ are all located a short distance from 東京駅とうきょうえき・Tokyo Station

The prestigious Imperial Palace皇居・こうきょ is just two blocks to the west of Tokyo Station, and with Edo-era moats, walls, gates and gloriously landscaped gardens they’re an ideal place to go for a stroll, and to take in some culture. Wanna feel like the 天皇陛下てんのうへいか・Emperor of Japan? Tours of the 皇居こうきょ・Imperial Palace are available with a reservation made at least one month in advance.