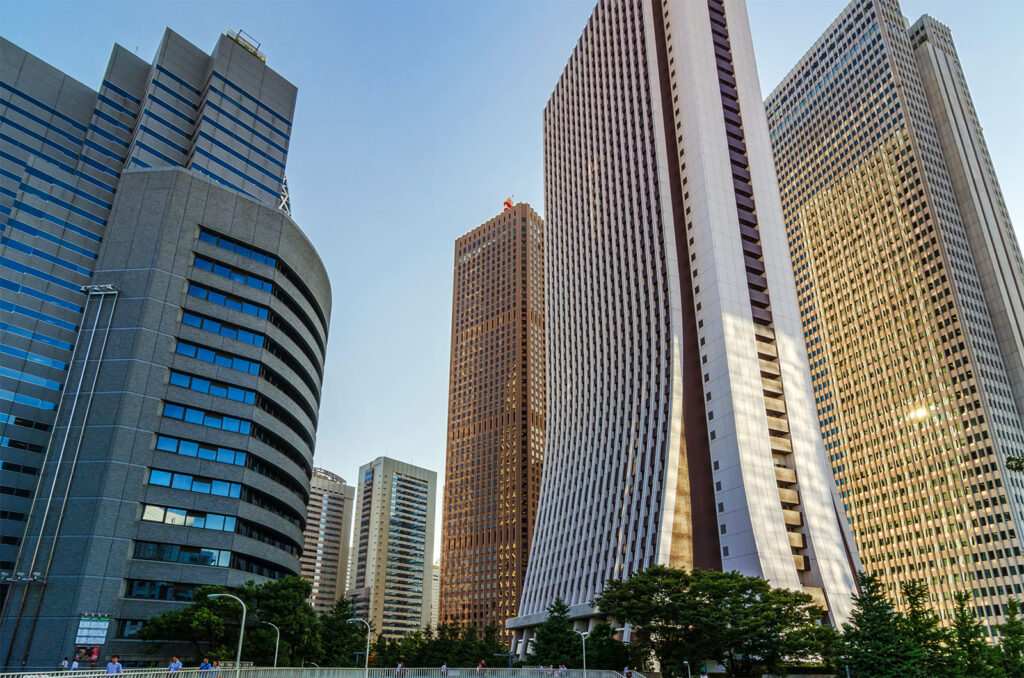 Known as a city within a city, Shinjuku Station is a massive complex that is used by over 3.5 million people a day. The surrounding area is home to everything from great food, shopping centers, government buildings and scenic parks.

This is it, the big one. Shinjuku Station新宿駅・しんじゅくえき (新宿: 新 – new 宿 – lodgings: Shinjyuku was a lodging area back in Edo era) was recognized by Guiness World Records in 2007 as the busiest 駅えき・train station in the world when more than 3.6 million people per day passed though its 改札口かいさつぐち・ticket gates.

Shinjuku is also the second largest in the world in terms of area, and one of, if not the most convoluted. 36 platformsプラットフォーム are spread between 3 buildings and are served by 24 different JR lines and multiple subway lines from a number of different companies.

There might be more than 200 出口でぐち・exits but finding even one of them can be a challenge. It’s been said that unwitting visitors to Shinjuku Station have disappeared into the depths of the station never to be seen again.

That said, 新宿駅しんじゅくえき・Shinjuku Station is a great place to get lost. Why? Shopping, shopping, shopping and more shopping. There are restaurants, coffee shops, ice cream stores, smoothie bars, ramen stands, clothing stores, department stores, electronics stores, whatever kind of store you want to find it can probably be found in or around Shinjuku Station.

Several department stores are built directly into Shinjuku Station. Lumine 1 and 2 are above the JR lines, and the Odakyu and Keio department stores are above their respective train lines also. There’s also the Keio Mall京王百貨店・けいおうひゃっかてん shopping concourse adjacent to underground Keio Lines, and the Odakyu Ace underground mall near the bus terminal on the west side of Shinjuku. Exercise extreme self-control or your wallet will come away empty.

The west side of Shinjuku is in a seismically stable (for Japan) area so there are many sky scrapers here. Most notably the Mode Gakuen Cocoon Towerモード学園コクーンタワー・もーどがくえんこくーんたわー and the twin towers of the Tokyo Metropolitan Government office東京都庁舎・とうきょうとちょうしゃ also known as Tochō都庁・とちょう. The top (45th) floor of each of the Metropolitan Government towers has a free observation lounge that is open to the public.

The view from 都庁とちょう・Tocho is not the highest in the city, Tokyo Tower東京タワー・とうきょうたわー and the Tokyo Sky Tree東京スカイツリー・とうきょうすかいつりー are taller but for the price (free!) this is one of the best views of Tokyo. If you arrive on a clear day you’ll be able to see all the way to 富士山ふじさん・Mt. Fuji in the west, and across all of the Kanto Plain関東平野・かんとうへいや in every direction with the night view being especially spectacular.

Anime fans, especially fans of デジモンティマーズDigimon Tamers, the Metropolitan Government towers should be familiar to you. Most of the action in the third series of Digimon took place in this building and in the Shinjuku Central Park新宿中央公園・しんじゅくちゅうおうこうえん and neighborhoods on their west side.

The east side of Shinjuku Station is home to more shopping and the Shinjuku Gyoen National Garden新宿御苑・しんじゅくぎょえん that features three gardens, one Japanese style, one English style, and one French style. It also has a Taiwanese tea house and is a great place for viewing cherry blossoms and the inexpensive ¥200 entry keeps a great deal of people away, making it a place where you can escape from the hustle and bustle of the city.