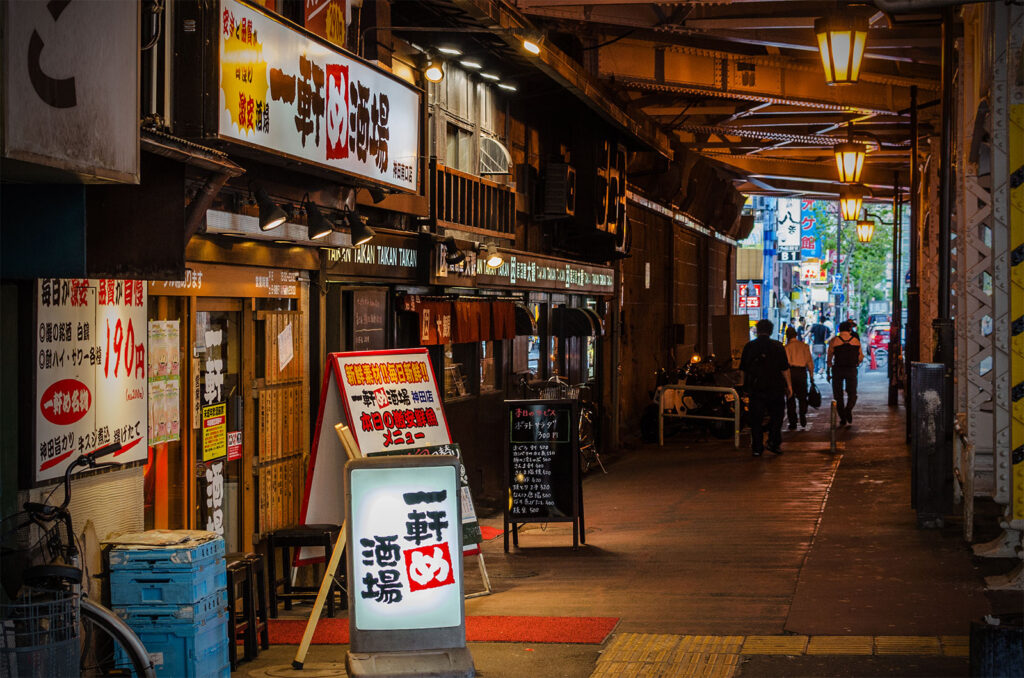 During the Edo period, Kanda had developed into an uptown area where nobles and rich businessmen lived.

Kanda Station神田駅・かんだえき (神田 – rice field of the Gods) is an intermediate station with a total of 8 platforms serving the 山手線JR Yamanote, Chuo and けいひんとうほく京浜東北・Keihin-Tohoku lines, and the Tokyo Metro Ginza Subway Line.

Because of it’s proximity to the 皇居こうきょ・Imperial Palace, Kanda was, from the Edo-era until the 1923 Kanto Earthquake an upscale area where wealthy businessmen, nobles and samurai made their homes.

After the destruction left by the 地震じしん・earthquake and by the bombings of World War II, Kanda lost a great deal of its original character. It is now the home of many high rise office buildings and several 大学だいがく・universities. The closest university to Kanda Station is the Tokyo Denki University東京電機大学・とうきょうでんきだいがく, a school offering both undergraduate, graduate and evening courses devoted entirely to 工学こうがく・engineering.

Sites such as the beautiful Kanda Myojin Shrine神田明神・かんだみょうじん, and the Tokyo Ressurection Cathedral東京復活大聖堂・とうきょうふっかつだいせいどう (home of the Japanese Orthodox Church), are a short ride away from Kanda Station on the 銀座線ぎんざせん・Ginza Subway Line. To the south of Kanda Station is the Tei Park Communication Museum whose exhibits detail the history of communication from the start of the Japanese 郵便局ゆうびんきょく・post office to modern day telecommunications.