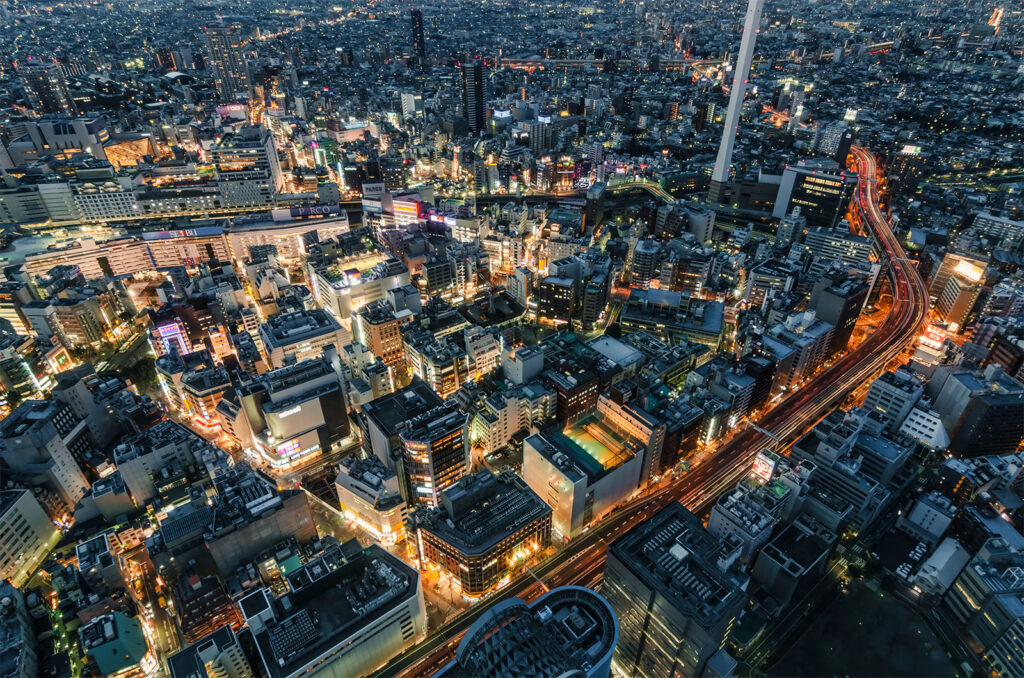 With over 2.7 million people passing through its gates everyday, Ikebukuro is one of the busiest station in Tokyo.

Ikebukuro Station池袋駅・いけぶくろえき (池袋: 池 – pond 袋 – bag) The name ‘Ikebukuro’ was used to describe the lowland swamps around the area. It was recognized by Guinness World Records in 2007 as the second busiest train station in the world (Shinjuku Station being the first), when over 2.7 million people a day passed through it.

Three different train companies and the Tokyo Metro 地下鉄ちかてつ・Subway serve its 26 platforms. Despite being very busy, Ikebukuro is easy to navigate with just two main exits on the 東ひがし・east and 西にし・west sides.

Apart from company offices, Sunshine City also has an 水族館すいぞくかん・aquarium, several レストランrestaurants, and an observation deck on the 60th floor. On a clear day visitors to the observation deck can see, 富士山ふじさん・Mt. Fuji, the Izu and Miura Peninsulas, 東京湾とうきょうわん・Tokyo Bay, and the Tanigawa Mountains谷川岳・たにがわだけ on the boarder of ぐんま群馬・Gunma and にいがた新潟・Niigata can all be seen in once place.

Sunshine City is also home to the Manten Planetarium満点プロネタリウム・まんてんぷろねたりうむ. The planetarium features three kinds of shows ranging from the usual astronomical science shows, to healing and health shows featuring music and aromas to help visitors relax. Sunshine City was built on the site of the former Sugamo Prison巣鴨拘置所・すがもこうちしょ, where World War II war criminals were imprisoned and executed. Modern popular lore rumors the whole area to be haunted with 幽霊ゆうれい・ghosts of past prisoners.

On the west side of Ikebukuro Station is the Tokyo Metropolitan Art Space東京芸術劇場・とうきょうげいじゅつげきじょう, a 14 floor (10 above ground, 4 below ground) facility designed to promote all forms of art. Its facilities include a concert hall; a large theater for conventional shows and two smaller theaters for non-conventional shows. An exhibition hall and two smaller galleries; six rehearsal rooms available for hire, restaurants and 本屋ほんや・book stores.

Being a major train station, Ikebukuro has lots of opportunities for shopping. Both the 西武せいぶ・Seibu and 東武とうぶ・Tobu）companies have large デパートdepartment stores just outside either exit of the station; ビックカメラBic Camera has its flagship store near the east exit, and the ジュンク堂書店じゅんくどうしょてん・Junkudo Book Store, near the 東口ひがしぐち・east exit, has a great selection of English language books on the top floor.

Ikebukuro might mean pond bag, but with this much to do there will be more than just pond water in your shopping bags.