Riding the bullet train () is something most travelers look forward to when coming to Japan. It’s fast, punctual, and a cultural experience all rolled into one. The sheer convenience of traveling at lightning speed from one prefecture to another, all while eating a cutely decked out bento box, sets it apart from all the other kinds of trains in Japan.

For most first-timers, the bullet train ticketing system might feel a bit complicated. Sometimes require you to use two tickets instead of one and vice versa. The reservation and payment system might also be confusing if you didn’t avail of the JR Pass ahead of time. Not to mention, the tickets you’ll be purchasing don’t come with line by line English translations.

As previously mentioned, there may be times where you’ll need to keep two types of tickets on you. Losing both will cost you an arm and a leg, so keep them close.

Written on the second line of the ticket are the general area () and city zone () of departure and the destination. Underneath it is the period of validity (～), while the train line’s name () is written in smaller text on top of it. Toward the lower part of the ticket, it will mention that you are not allowed to make any stopovers within the given area (の) and the date of issue ().

Lastly, if you happen to be using a student discounted ticket, you will be asked to present a valid student ID (してさい). 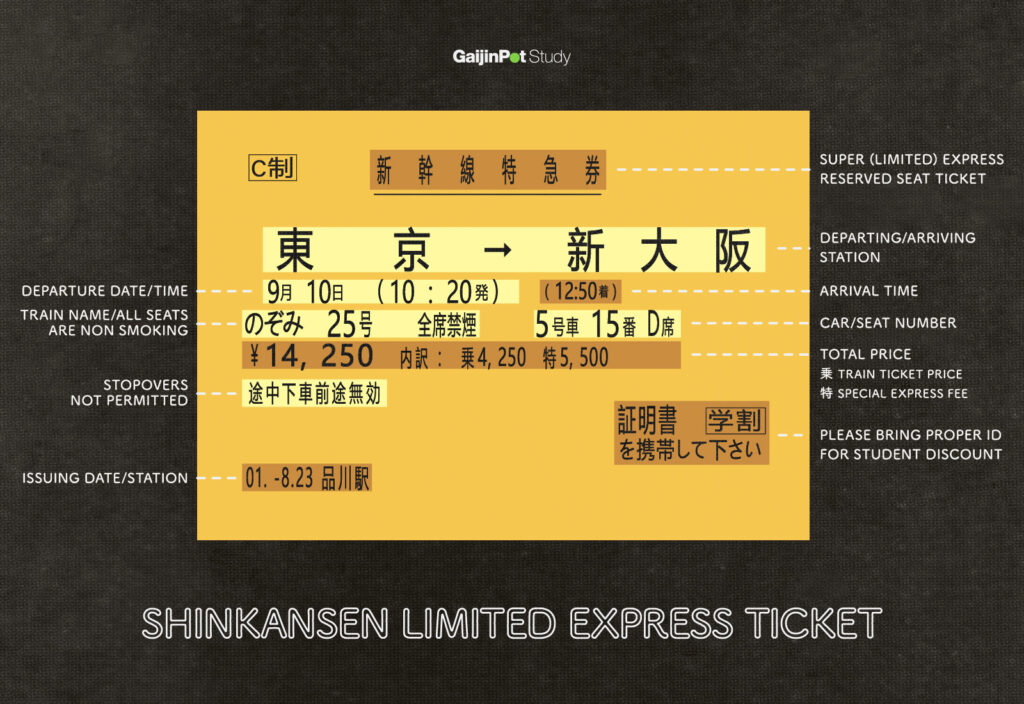 Similar to the basic fare ticket (), the Super (Limited) Express () also has the departure and arrival station. Underneath it, you’ll see the exact date and time of departure () and the corresponding arrival time (). After that, you’ll see the name of the train written in katakana, the number of the train, and the notice that the entire train is non-smoking (). Written next to the non-smoking notice is your designated seat and train car number () and seat number ().

As for the figures below your seat details, it’s a breakdown of the shinkansen fees. You will also see the same warning about stopovers and the need for a valid student ID, just like the basic fare ticket.

Now that you’ve studied up on all the kanji seen on bullet train tickets get up and go! The options are endless, and if you need some ideas on some great destinations all around the country, make sure to do a thorough sweep here. Safe travels!