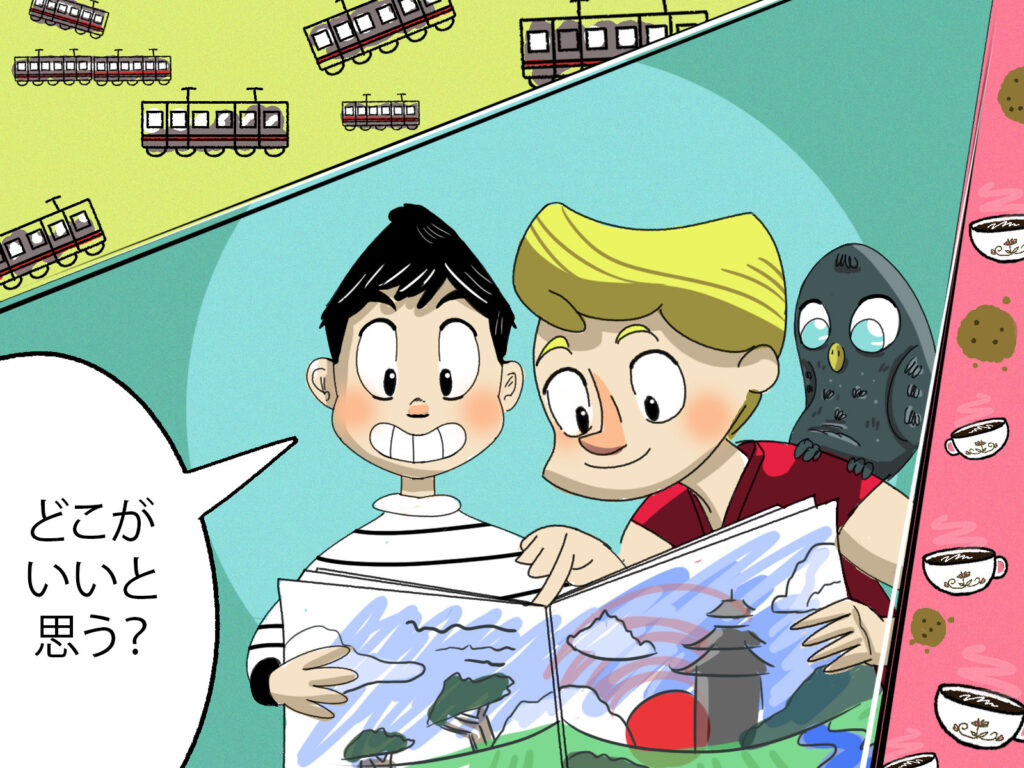 Whether you’re visiting Japan or you’re a resident and looking to get out of the house,

Whether you’re visiting Japan or you’re a resident and looking to get out of the house, vacations are important. Like super important. So important I will not waste any more time with a longer intro: let’s start the conversation!

Sam: We should go somewhere over the weekend.

Tomomi: What’d you have in mind?

Sam: Well there’s an owl café in Osaka I’d like to see.

Tomomi: That sounds popular, so we’ll need a reservation. It’s probably cheapest to go to Osaka by bus.

Sam: We can save a little by staying at the capsule hotel in Shinsaibashi.

Tomomi: And then we’ll also be close to the shopping district!

and are two words that I get more daily use out of than…my bicycle. They mean “reservation” and “saving,” respectively. Make sure to add する onto the end to make them verbs. And note that 節約 kinda refers to economical savings or being thrifty; it doesn’t actually refer to what’s in your bank account but a desire to increase that amount by being conservative with your spending.

Last vocab word for this dialogue is まる. It is a verb meaning “to stay the night.” If you crash at a friend’s place or at the above-mentioned カプセルホテル, you will need this verb.

にきたい represents one of the easiest and most useful compound verbs you should definitely keep up your sleeve. Take the root of a verb, use に as a connector, and round out your compound with 行きたい; what you get is a compound meaning to want to go and do whatever the verb root is you started with. 見に行きたい is to want to go see something, and it is the most common use of this pattern. As you become familiar with this, as with all things Japanese, don’t be afraid to get creative.

なら also gets used quite a bit here. You don’t really need なら, as it does work similar to もし and から (“if” and “because”). But it can often have a nuance of referring to a preferable situation. It’s like a gentle “should do,” or a light recommendation. This isn’t 100% the case, but if you’re looking to grease the wheels and be pleasant about it, this may be your ticket.

I personally don’t use it that much, but that’s why I shopped these dialogues around to Japanese friends to get their input, and they seemed to rather like the word なら. As a bit of practice advice I would advise considering your words carefully when you want to use similar phrasing that relates to “if,” “because,” “therefore,” etc., and see if なら may be the preferably option for expressing “preferably.”

We haven’t talked about suffixes much, so let’s start there. on the end of a word is often a suffix meaning complete or the end of something. This isn’t always the case, but it is the case often enough that it’s worth observing. Let me give you three everyday examples:

Ok, so that third one…curtain in that case also refers to the Tokugawa Shogunate, so it’s more like shogunate + end. If you’re into samurai stories you’ve probably come across that word before. If not, now you know.

But like all kanji 末 has not just a Chinese reading (onyomi) but also a Japanese reading (kunyomi). It’s すえ and most of the time it means the same thing. Here are two more examples:

There’s no 100% way to know which reading to use without knowing the word already, but まつ is usually the safer bet.

I hope this helps you get some footing for traveling in Japan and Japanese. I recently went to the rabbit island down by Hiroshima and it was awesome, but I still dream of going to an owl café like the one mentioned in the dialogue.

Take a careful look at the dialogue and you should have little trouble saying how you’ll get somewhere, where you’re going to crash, and debating the broader issues of trying to have a little cash left over at the end of the day. Best of luck!