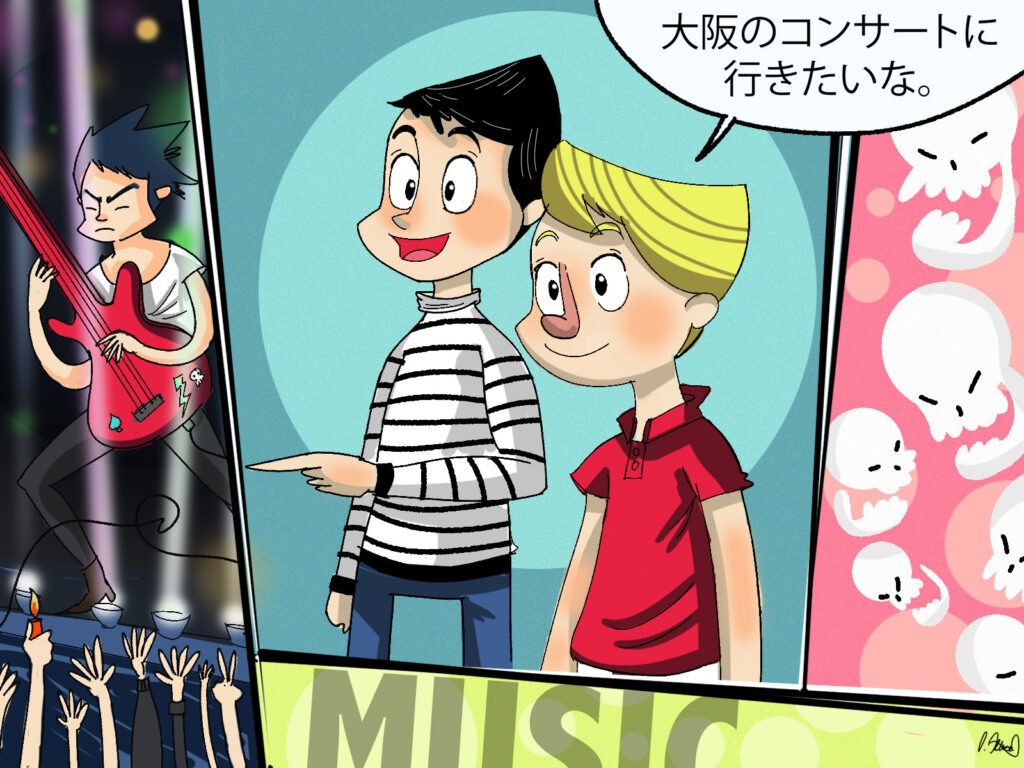 One of the best ways to learn Japanese is through conversation, but sometimes you don’t have a partner on hand or you want to focus on a certain topic. I’m hoping to introduce a little more Japanese to interested learners starting out through short dialogues—just enough Japanese to expand your fundamentals a bit.

Tomomi: Have you seen this video?
Sam: No. Whose is it?
Tomomi: It’s this band I’ve been really into lately! Look!
Sam: It’s very punk. You’ve got great taste in music. This is really interesting!
Tomomi: I want to go to a concert in Osaka.
Sam: Together?
Tomomi: That’d be great! I can’t wait!

Looking at the vocabulary in this brief conversation, I’d like to start with the katakana English words. Borrowed English in Japanese is a god-send because they’re words you already know but pronounced just a little differently. Sometimes the meaning is a bit different, but generally it’s not too tough to remember. I will admit that sometimes your tongue will get tied up in a Gordion knot saying things like シンパシー (shinpashi—sympathy) or シャーリーズ・セロン (sharrizzu・seron—Charlize Theron) but that’s what practice is for.

グループ (guruppu): group
Here the word is used to refer to a band/musical group, but it can be used in most of the ways you’d think to use the word in English.

パンク (panku): punk
A number of musical genres have found their way from English into Japanese with little alteration, including ロック (rokku) or rock and ジャズ (jyazu) or jazz, among many others.

スタイル (sutairu): style
While Japanese has many different ways of referring to forms and styles, such as 形 (kei) and 風 (fuu), this is a good place to start your collection, since as an English speaker it’s a word you’re already familiar with. And while there are some situations where we would think to use “style” that a native Japanese speaker might not, it’s very unlikely that you’ll be misunderstood. While we should all try to refine our Japanese and become more eloquent, having people know what you’re saying is a good start.

コンサート (konsatto): concert
Concert is concert, but only in the sense of a musical show. You won’t hear this used to mean something like “they worked in concert together to build the boat”—and I’ve probably just revealed that I don’t talk like a normal person in the first place.

センス (sensu): sense
In the dialogue, Sam compliments Tomomi on her “good sense,” but he’s not talking about her carefully constructed stock portfolio. “Sense” as it is most commonly used in Japanese refers to what we’d think of as “taste.” So if you’re complimenting your friend on her great taste in music, fashion, or taxidermy, this is the word you can rely on.

There’s one other English-y word hanging out in the first sentence, “CM” (pronounced shi-em). CM stands for “commercial message,” and is used to refer to short promotional videos, such as commercials; however, in Japanese it is also sometimes used to refer to music videos.

There’re only 2 points of grammar that I want to mention, and we’re going to use them together to cheat at Japanese. The first comes in the opening line and is “past tense verb + ことある,” (koto aru) which means to have done whatever the verb is. Now you could just as easily just use the past tense of the verb to convey the same meaning; in this case “seen”: 見た？ (mita). But when asking if someone’s done something it’s very common to nominalize the verb (make the verb into a noun). This is a good construction to remember just because it’s so common despite that it may seem inconvenient.

The second grammar point I would like to draw your attention to is the ~たい (~tai) form of verbs. It means “to want to.” In the above dialogue we see 行きたい (iki+tai), meaning “to want to go.” Now the conjugation for this can be a bit tricky, and I’m not going to go into too much depth here; however, the one form you should remember is “したい” (shitai) for “want to do.” You’ll pick the conjugation for this verb form up pretty quick once you’re in a class or take to studying, but if you’re ever unsure, you can always nominalize the verb and then add したい. Sometimes it will sound funny; sometimes it will sound like you’re trying very hard to sound smart; sometimes it’ll sound overly polite; but it will always be understood.

Let’s say I forgot how to say 行きたい. Well, I do need to remember the verb for “to go” is 行く (iku), then I tag on こと (koto) and したい (shitai), giving me 行くことしたい (lit. wanting to do the thing of going). Yes, it’s not the most natural sounding Japanese but it works. And したい puts the “want” in all your nouns.

It’s just that easy. Now, I’m not saying you’ll never need to know another verb besides する (suru)/”to do” ever again, but when you find yourself stuck, it’s good to know you can just noun that verb and get on with your conversation with hardly anyone the wiser.

Kanji were the first part of Japanese I really fell cranium over tailbone for when studying, even though it seems the opposite is true for many people. I cannot emphasize enough how important they are even if you say “you only want to learn to speak and not read.” They’re worth the effort.

There are 2 kanji that appear in the above dialogue that aren’t terribly common in the classroom, but once you start reading light novels or manga, you’re bound to see them a lot: 誰 (dare) and 凄い (sugoi). 誰 just means “who,” and even if you have a casual internet existence, if you’ve crossed paths with many memes there’s a good chance you’ve seen 凄い, meaning either “great” or “terrible.” You don’t need to give it anything to modify, since on its own it can mean “extremely good” or “extremely bad,” though for the sake of clarity you may want to. It tends to get overused, so like “awesome” in English, it mostly boils down to being another way to say “very.”

Lastly, in the above dialogue you can see 観る (miru) for “to see,” though in a later example in the Grammar section I write it as 見る. In Japanese writing there are often different connotations for similar words that can be implied through the kanji, despite the words being read exactly the same. “Miru” comes in many forms, including but not limited to 見る, 観る, and 診る. 見る is your general purpose “to see,” 観る is more like “to watch” in English, and 診る means to observe or examine a patient at the hospital. In conversation they all sound the same, but when written down each one carries a slightly different meaning.

Well that’s all for now. I hope there was something useful in there for you if you took the time and read all the way through; even if it seems like a bit of an intellectual thicket to have to wade through, starting to recognize the fauna makes it that much easier to carve out a path in the future—and there’s so much to be excited about.