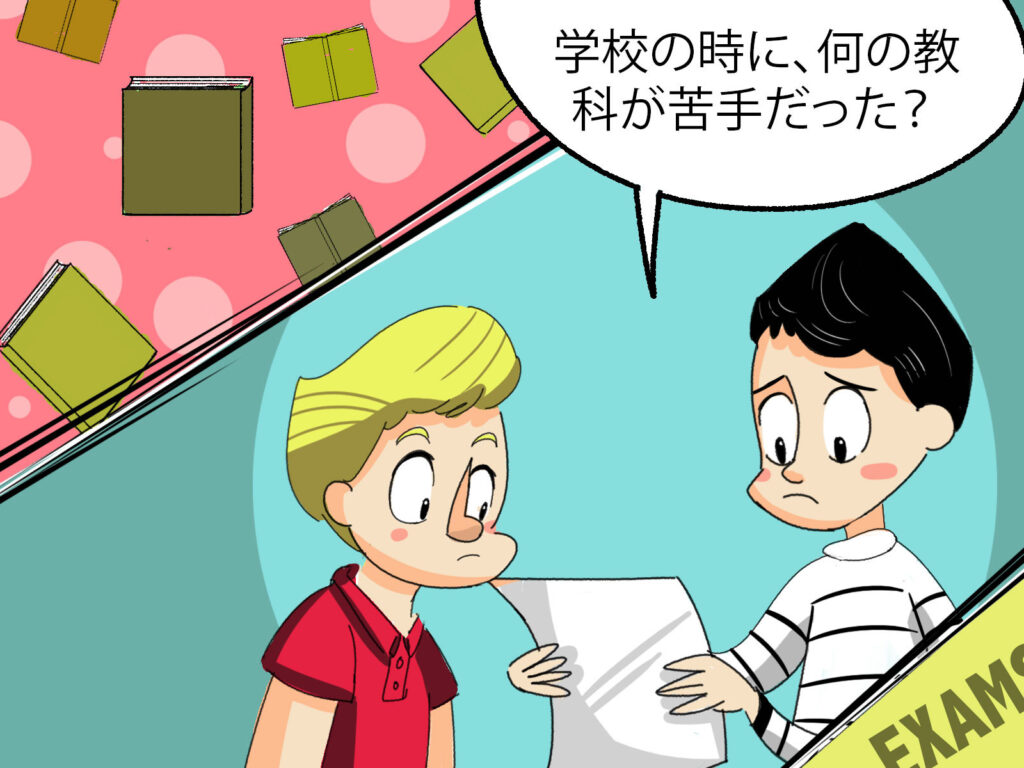 While many of us graduate from school and then consider ourselves rid of standardized testing, there actually remains a plethora of exams that anyone working in Japan or with Japanese might yet face. In Japan there are a multitude of tests designed to prove that Japanese employees have competent English ability, and if you’re a native English speaker you may well be looking at taking the same kind of test to show you can make the Japanese language work for you.

One of the most notable of these being the Japanese Language Proficiency Test (or JLPT), which although not perfect (what test is) can be a good way to set study goals for yourself and get a kind of language certification as you go. Here we’re going to look at two people having a brief conversation about tests they’ve taken and education, which if you study abroad is a dialogue you’re likely to have yourself.

Sam: How’d you do your TOEIC?

Tomomi: Not as well as I’d hoped, but still better than last time. Did you pass your JLPT?

Sam: I failed by a couple points, but next time I should pass easily.

Tomomi: What was the hardest subject for you in school?

Sam: I was never great at science, but I liked it. You?

Tomomi: I was always bad at English. I wish I’d studied harder when I was younger.

Sam: How often do you study now?

Tomomi: I try to squeeze in a few hours a day, but it’s hard to stay motivated after I get off work. A little less overtime would be nice.

Two very important words when it comes to taking a test:

We have another opposing pair in the above dialogue with and , or “skilled at” and “unskilled at.” Of course how we determine how good we are or how good we are getting at something is through our goals — and how many points we get on a test — .

目標 is great because it can be used to describe any objective, whether that’s learning to scuba dive or upping your amount of study to 2 hours a day. Yes ゴール (gorru) can be used to mean goal as well, but sometimes we must reach beyond katakana English that we might grasp at moonbeams—or sound slightly more awesome, or whatever. 点 is pretty easy to use in this context because all you have to do is stick a number in front of it to get the desired meaning. It has a number of other uses where it fulfills roles similar to the way the word “point” does in English, so keep an eye out for the interesting ways this kanji can stand on its own.

Another word that I worked in because it was useful when I used to teach in Japan (yes, I too was an ALT) is , which means “school subject.” It’s good to know and have in your repertoire, especially as I imagine a large part of the target audience for these articles and GaijinPot includes people who are or want to teach in Japan and brush up those Japanese language skills.

Let’s talk about より. より is how we make comparisons, and is one of the most useful tools you can have in your Japanese toolbox. Don’t quite know the adjective you’re looking for? Use より to compare your subject matter to something you do know how to talk about. That tree isn’t gi-normous; it’s taller than a school. When talking about ghosts before I mentioned みたいな. より can be used in a lot of similar ways, but where みたいな makes a direct comparison より is all about being more something than something else.

Tomomi uses it twice in the 2nd line with より and より, which mean “more than I aimed for” and “more than before,” so よりよくた means “I was able to do a lot more than before”—or to put it into regular parlance, “better than last time.”

Take a look at a few more examples and be sure you get it. Once you get used to using this pattern in Japanese expressing yourself will be all roses that are peachier than other peachy roses:

バスをつよりむしろきたい。(I would rather walk than wait for the bus.)

There are two things that are somewhat intertwined when it comes to kanji that I’d like to consider in the above. Essentially it’s how to deal with long strings of kanji; both breaking them down and gaining a sense for how to tackle them.

The JLPT in Japanese bears a daunting name for any newcomer: . If you just look at it, no guides, no assistance, it looks like an awful lot of strokes piled together into one big…well, pile.

Funny story, there was a manga I was reading that had an auto-immune disease where folks turned to stone, but I got to the first part of that and figured it was AIDS; not until I went back later and took the word apart did I realize it was an original word for the comic and it involved people transforming into statues and dying. In my defense it was a really long word, and I read manga to relax and be lazy.

Anyway, for these kinds of long strings I recommend seeking out what you know and then building words 2 kanji at a time with the aid of an online or app-based dictionary.

Many Japanese students will recognize the first 3 characters as 日本語, or the Japanese language. From there you add on the next kanji which is 能. This will come back as not a word in most dictionaries—actually if it’s a halfway decent dictionary it’ll pop-up with the Japanese for JLPT and you’re all set. But if it doesn’t you have 2 options. Either you keep putting in kanji and adding to the string until you get something, or what I’d recommend is segmenting what you’ve got so far and try starting a new string in your digital dictionary.

日本語 is a thing, so let’s try the next 2 kanji together: 能力 (nou+ryoku). You’ll get something like “ability.” Add 試, find out that 能力試 isn’t a word; segment again; try 試験 and find it means “test.” Basically my advice is get a good digital dictionary—preferably one that lets you enter kanji using radicals if you’re starting out—and work through that word beginning to end to make sure you know just what it’s trying to tell you.

Pretty obvious right? Yeah, sorry I wasted your time, but it took some of us longer to put it all together so I thought I’d say something. The reason this can be important is the instance of 絶対合格 (zettai+goukaku) above, where there are 2 words of 2 kanji each rubbing right up against one another. Unless you already know the words there’s no way to know that those are 2 separate words without breaking them down as you inch through 2 kanji at a time in your dictionary.

Well now that I’ve reminded you just how much time you’re going to be spending with a dictionary as you learn to read and prep for tests, alienating most of my audience…don’t get discouraged. Everything gets easier with practice. Find what you like and do that, even the hard parts. Classes will help, but at some point it’s also going to come down to you digging out that one kanji. Fortunately in a digital age there are loads of online resources in addition to traditional classes to give you an added edge, and make it way way WAY easier to look up those frustrating little clusters of strokes.

Personally I didn’t go the testing route and found my own motivations to press on, but it’s worth giving a shot and seeing if it works for you.