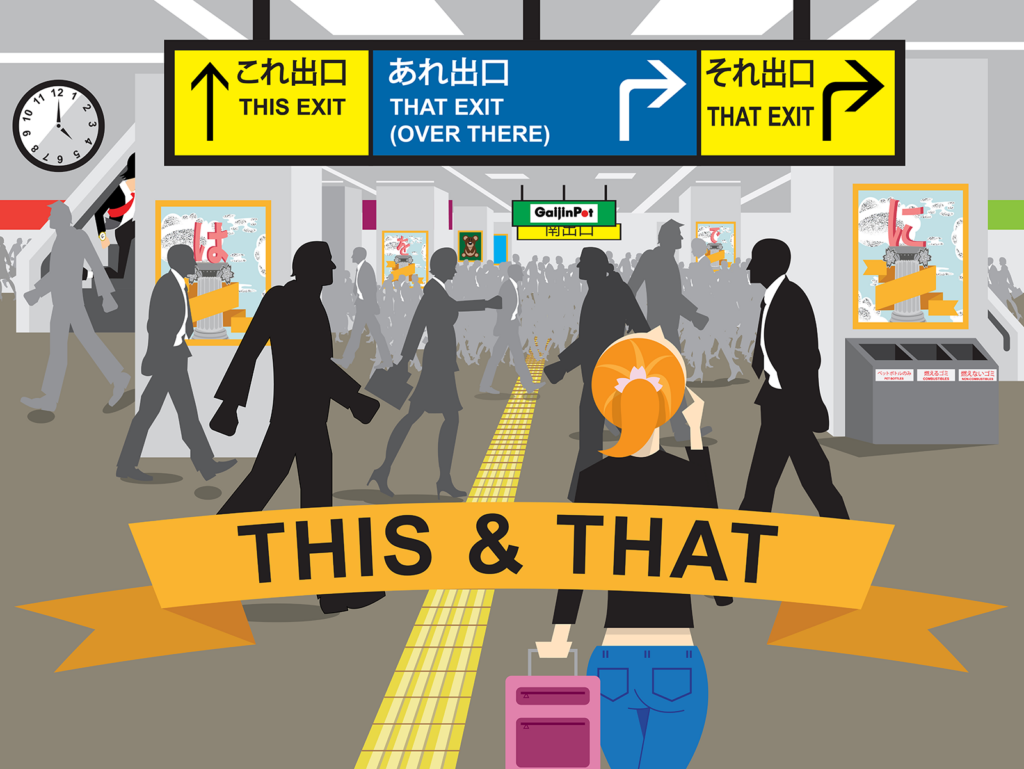 Being able to say “this” or “that” is pretty key in Japanese, especially when you don’t know the words for things because then you can ask “what’s this/that.” There are two constructions for using this set of words; one is used when they are being used as pronouns, and one is for when they are used as an adjective, adverb, or definite article. It’s simpler than it sounds.

When talking about stuff (as opposed to people) these are the pronouns you’ll be using. And the initial sounds of each of these words are even more important because they are universal throughout many such pronouns—and the second syllable changes to suit the variety of functions I mentioned above. For example, ここ [koko = here], そこ [soko = there], あそこ [asoko = there (over there)], どこ [doko = where]. The first syllables—ko, so, a/aso, do—designate similar meanings in each set of words.

I’d say there are 4 sets of words that use this pattern that are made use of in daily Japanese and endless variations therein, but as you come to associate the primary meaning with that initial sound, the variants won’t prove much of a challenge. Fortunately, these words are used so frequently that you’ll encounter them innumerable times as you study, so locking them into the memory banks will come naturally.

Another early series I really fell head over heels for early on was いばらの王 or King of Thorn. It’s often referred to as a fantastique manga, meaning it has some literary and cinematic qualities presented in a mix of sci-fi, fantasy, and horror. This, like many of the other comics I’ve mentioned, is going to be a challenge if your kanji game isn’t up to snuff.

It’s only 6 volumes and when the big twist starts to get its reveal towards the end, even the grammar can get to be a bit of a challenge in this series. So why am I bringing it up here, when you’re most likely looking for tips to get over some of the initial hurdles of learning Japanese? Because not only is the art and story in this comic great, but it is filled with action sequences.

The art does a great job of relaying to you what’s going on if you struggle with some of the sentences, and when you reach a 5 page action sequence you get to just enjoy the art for what it is and zip through a few pages. Even if you’re technically accomplishing less work because the action is just looking at art and not actually reading Japanese, the feeling of making progress is of significant importance to keep yourself motivated when studying—when keeping any kind of notes while studying I also recommend only writing on the front-side of sheets; you can always use the left-hand side later (and you’ll end up reviewing the notes you wrote on the right side before), and this way you can feel yourself moving forward.

There’s a compound particle here that we didn’t really talk about before: には. It basically does the jobs of both に and は together. So we get “that has your personal data entered in it.”

I think this one is fairly self-explanatory, but it does show a kind of after-the-fact clarification that sometimes is used for different effects in Japanese—here it’s a touch dramatic. So the subject of the “strangeness” that the person is talking about is “this,” but the person doesn’t say “this” until afterwards. Imagine a hero has inadvertently unleashed a demon upon the world and it’s causing carnage; upon witnessing the devastation she remarks “All this carnage and devastation…is my fault.” The “is my fault” part of the sentence that emotionally punctuates the observation is very similar to how the aforementioned works in Japanese. Sometimes people also do it just to make clear what they’re talking about if they realize that maybe they’re being overly vague.

You can figure out pretty quick that this means “that is also good.” But it’s got more of the attitude of “that’s fine, too.” And just like in English, it can be reassuring or dismissive.

This should be pretty straightforward: decide whether これ [kore], それ [sore], あれ [are], or どれ [dore] would be appropriate in each sentence.

So I didn’t use どれ [dore]—my apologies. #1 should be pretty obvious. #2 is あれ and not それ because it refers to an object that is neither near the speaker nor the listener. #3 is それ because we know that the listener is holding the object. #4 is referring to something close to the speaker, and while we might on occasion say “here” in English, you’d probably here “this” or “these” in Japanese; これ can be made into a plural by adding ら [ra], so “these” is これら [korera].

It’s good to remember that the thoughts you’d like to express in Japanese may take on a slightly different form when put into Japanese; yes, direct translation can be handy when you’re not entirely sure how to relate something in natural Japanese, but the long term goal should be to have native-sounding language skills. And #5 is それ because presumably the goggles being spoken of are near the listener—either physically or figuratively. In #5 you would actually likely see その instead of それ, which is the form of “that” that is used when “that” is tied to an object such as “that hat”; got all that?