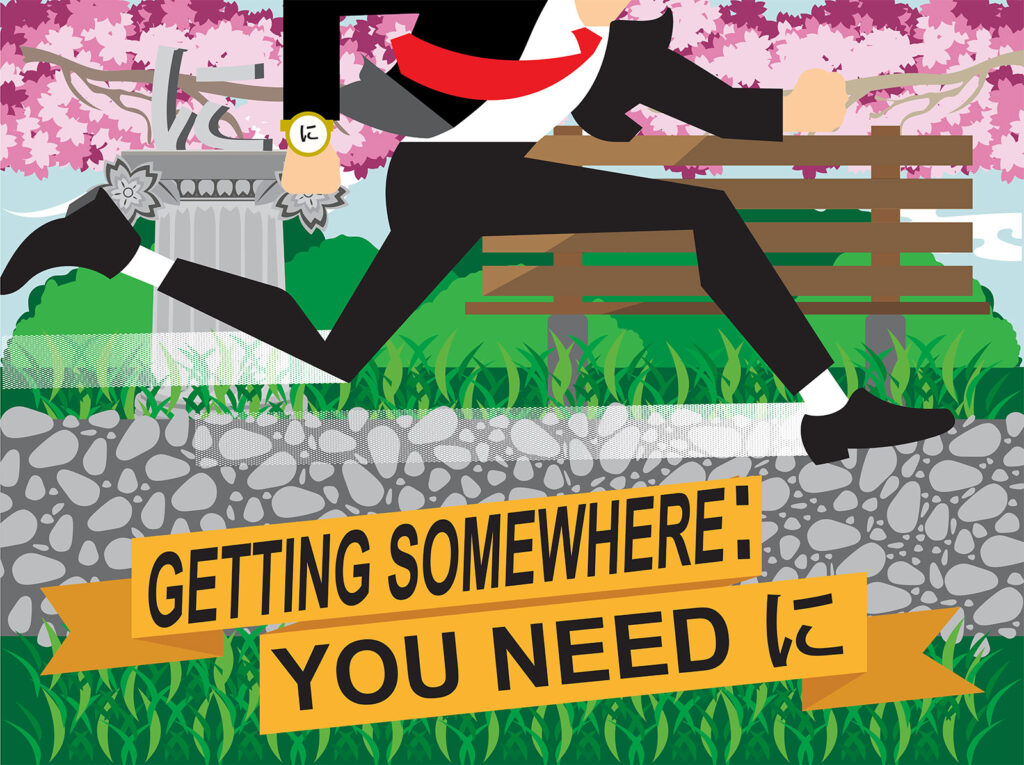 Getting Somewhere: You Need に

With the first article in this series that introduced は and its brother が and so in this article we’re looking at に and a little less so at へ.

に is a busy little so-and-so. Let’s just quickly skim over its résumé:

Despite its varied utility, に can generally be thought of as indicating the direction in which something goes, and then as your studies progress you’ll pick up that it gets partnered with the occasional verb like ある (to be) because reasons.

This sense of going “towards” something or indicating that a verb has a target is also good if your mind isn’t really programmed for grammar; see 1: marks an indirect object. An indirect object is the target of a verb, or what the verb is acting towards, fundamentally speaking. So long as you keep this general notion in mind, you’ll never be bemused when you should be amused.

Anything へ can do, に can do better, but へ still gets invited to parties and serves a few of the same functions as に but not all of them. It’s kinda like the letter k or s; sure they make things clearer, but most of the time if c shows up they don’t really need to be there. It’s generally used only when literally going somewhere, and…that’s all the time we’re going to be spending with へ.

The examples for this article are taken from a manga called World Trigger, or ワールド・トリガー. It’s by Daisuke Ashihara and walks the line between sci-fi, comedy, and high school drama. There has to be a single word for this genre given how common it is in Japanese. Either way, it’s a fun comic, and it’s targeted at more of a teenage audience, meaning it gives you reading guides for all the words in the form of hiragana next to the kanji. Yes, you may have to look up many many words going through and decipher some grammar, but at least you’ll be able to read everything—so long as you know hiragana.

This sentence has が, which I mentioned briefly in the previous segment, and it also has both に and へ; while the author could’ve used に twice, the sentence comes out a little easier to read and sounds more interesting because of the choice to use different particles to fulfill similar purposes; it also gives the sense that the part tied to に goes in one direction and the part associated with へ goes in another.

The two parts we want to focus on are “this town に” (このに) and “a different world への” (へ); we also need to consider what is happening: a gate has opened. The first part is pretty clear, right? That gate has opened to/に this town. The second bit is a bit trickier because へ is working with another particle to slightly change its meaning. の (no) is a possessive particle; it works kind of like apostrophe + s in English (like Mike’s bike). So we have “different worldへの gate” meaning that the gate goes to this other world. It’s not absolutely necessary, but like using に and へ for similar roles, it makes the sentence a little less ambiguous and more readily comprehensible.

So once we know what the particles are doing and what the words mean, we get something like: “On that day a gate to another world opened in this town.”

I cut this part out of a much longer sentence to maintain focus. This addresses the more basic concept of what I discussed above. The “thanks” or “thank you” goes to Osamu.

に has a wide variety of uses and functions, and it’s best to start with the basics. Once you start to get a little comfortable or when you encounter something that doesn’t fit with the way you currently understand the particle, then it’s time to expand. Good luck!